For the past two weeks, I have been joined in Mauritius by a friend from high school, Trae Middlebrooks. A couple of months ago I had sent him a message that started “Do you want to go on an adventure . . . ?” He responded in the affirmative, no questions asked.

Although we stayed a few days on the main island of Mauritius, the bulk of our trip was  spent on the island of Rodrigues. Rodrigues, part of the Republic of Mauritius, is a small island with about 40,000 residents. It takes 90 minutes to fly to it from Mauritius, and yet you can drive across the whole island in less than half an hour. It is perhaps the quietist place I have ever been.

Like Mauritius, Rodrigues is known for its Chambre d’Hotes, or guesthouses. Most of these establishments are owned by a family and provide family style breakfast and dinner to their guests. This style of guesthouse is the best way to get to know a place as you have a constant travel resource in the owners and in the the other guests. At Chez Jeanette, where we stayed for two nights, we enjoyed the company of a host of Rodriguans. One young man who joined us worked in family planning and told us all about the challenges of birth control and women’s health on the island. This led to a blush-inducing conversation about love and relationships on Rodrigues – a place where the dating scene seems to top that of Boston and other major US cities.

View from Residence Vue d’Horizon, one of the guesthouses we stayed at.

After checking into our hotel, we set off to the capital city. Viewed from an overlook on the way, we observed that it was charmingly small and would qualify only as a village in any other part of the world. Our driver had laughed when we said we might want a few hours to explore before he picked us up again. Our circuit around the town lasted about 45 minutes, but exposed us to a local craft market, a little bakery and a series of interesting shops. Near the beach we watched as a young boy of 10 or 12 chopped open coconuts with a machete. We bought two to drink, cringing with each chop. I asked him to hold up his hands so I could count his remaining fingers, but he did not get the joke.

We met our driver back in town and asked him to take us to Trou d’Argent, a beach that had been recommended to me by everyone who knew I was going to Rodrigues. Instead of taking us directly there, he dropped us off at the beginning of a trail that winds along the coast, passing by Trou d’Argent and a series of other small coves. The plan was for him to pick us up on the other side. My logistical questions – “How long is the trail?” “Is there cell service?” “Will we know when it ends?” “Where will we meet you?” – fell on deaf ears. He would met us on the beach we were told.

View from the coast walk along the Southern Coast of Rodrigues, Mauritius

Thus we set off with no map or guide on a walk along the Eastern coast of Rodrigues. The trail turned out to be one of the most enchanting walks I have ever taken. It passed along rocky cliffs and led down into a series of secluded beaches. There were intermittent bursts of rain and sun, which led to brilliant rainbows above these secret havens. Trae dipped in the chilly ocean while I crawled around with my camera, photographing the little caves and chasing after crabs. We only saw one other couple during our three hours, a pattern that would continue throughout our time on the island.

We climbed a high cliff to watch the ocean crash against the reef and were soaked by a sudden rain shower. In between beaches there were pockets of native coastal forest filled with bizarre trees and bushes. As the sun started to set we began to wonder exactly where we were on the path and exactly which beach (of many) the driver would be on. Just as I began to lose hope, we spotted him ahead, silhouetted against the dusk. On the drive back to the hotel, Trae and I agreed that the walk was better than a nap.

In between our outdoor excursions, we have done our best to soak up a bit of the local culture. On our first night, we went to a different hotel to see a live performance of Sega Tambour, the version of Sega that is special to Rodrigues. Sega music is a wonderful mix of reggae, African spirituals, and island music. The band we saw was called Manniok and it is one of over 200 Sega bands on the island – a pretty large number considering the population. We sat on the beach as the band danced, moving between guitar, drums, accordion, and tambour. My favorite song told the sad story of the Solitaire, a bird very much like the dodo that was once found in Rodrigues. 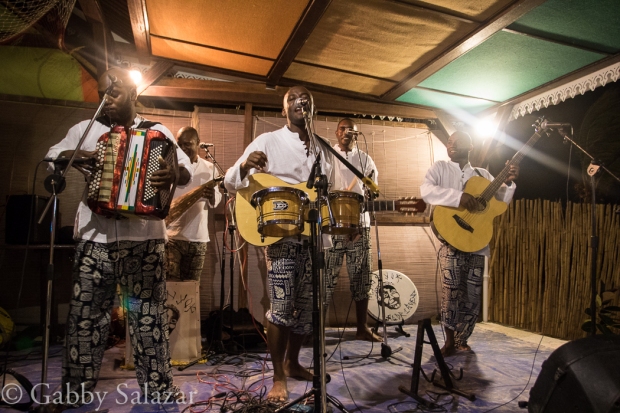 Another highlight was a stop at a local bakery owned by a woman named Valerie. I had read about her shop and was drawn to it by the promise of passion fruit cake. What was meant to a be a brief stop turned into a longer visit as Valerie herself guided us around the shop, explaining the process of creating jams, achards, and bread. Incredibly, Valerie makes all these products by hand despite having lost her sight a few years back. She graciously allowed me to come in her kitchen and photograph her while she rolled out loaves of starfruit bread. While shaping a perfectly oblong loaf, she explained that she is able to feel when bread and other products are ready and relies on her bare hands to guide her.

Valerie’s, a local bakery and confiture shop in the town of Citronelle, Rodrigues, Mauritius.

Rodrigues was completely charming. If you are looking for a place to escape that is not full of large resorts and fences, it is certainly an out of the way place to consider. As I told many people on the island, I had never even heard of it before we arrived in Mauritius. Now, I’m happy to spread the word . . . 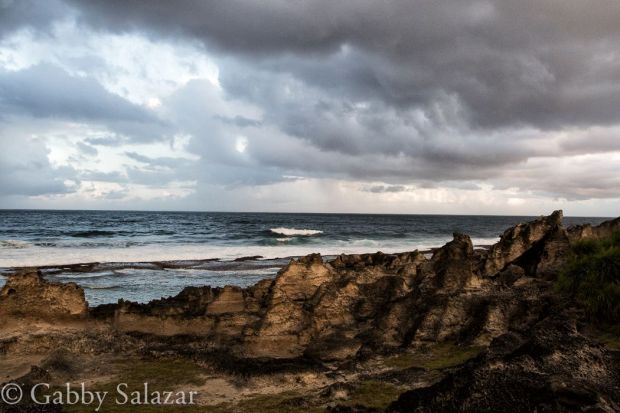 View from the Southern Coast of Rodrigues, Mauritius

A pirogue in the Indian Ocean near Rodrigues Island

Stay tuned for an upcoming post on the natural areas we visited, from Francois Leguat Tortoise Reserve to the beautiful Ile aux Coco nature reserve . . . .